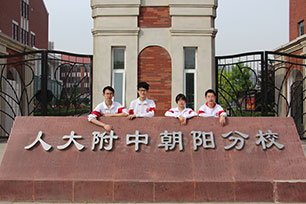 We are pleased to announce that a team called Bio Four from RDFZ Chaoyang Branch School in China has won the Cambridge Upper Secondary Science Competition for the East Asia region. Congratulations to all the winning students!

Cambridge International launched the Cambridge Upper Secondary Science Competition last year to give Cambridge IGCSE and O Level students the chance to work as a team and develop their skills in science. Team Bio Four – made up of Steven, Kyle, Jane and Chuxin – came together due to a shared interest in biology.

'Our project was about intercropping which is a kind of technique used generally in agriculture to increase the yields of the crops,’ explains Jane. ‘In particular, we wanted to investigate which type of vegetable could increase the growth rate of soy beans. It took us about two weeks to come up with an idea and then another week to prepare the apparatus needed for the experiment.'

The students took on different roles in the team, and were supported throughout by their teacher, Ms Jin Bo. ‘Our division of responsibility was relatively clear’ says Kyle. ‘I was responsible for finding the right seeds for planting, which would grow effectively and in a relatively short time. Other team members searched for relevant papers for reference, and others searched for relevant information about plants and then did a detailed analysis.'

Steven says the project has given him a better understanding of biology and how to set up and perform an experiment and collect data: 'I also gained experience in how to work with others. I believe this project will greatly help me in designing an experiment for my Cambridge International A Level studies.

He adds: 'When we first heard that we had won the prize, we were quite surprised, and then – just like people usually experience – we felt happiness burst inside our heart.'

'I think all students who are interested in entering this competition in future need to trust in their abilities,’ says Chuxin. ‘What you can achieve is beyond your own knowledge'.

The overall international winner of the competition was a team from Jayshree Periwal International School in India, who put together a project entitled 'Live or Dye? Negative impacts of synthetic dyes'.